We do this using a minimally invasive technique that has been tried and tested for many years, using a specially developed instrument (the “DHI Implanter”) instead of a scalpel. 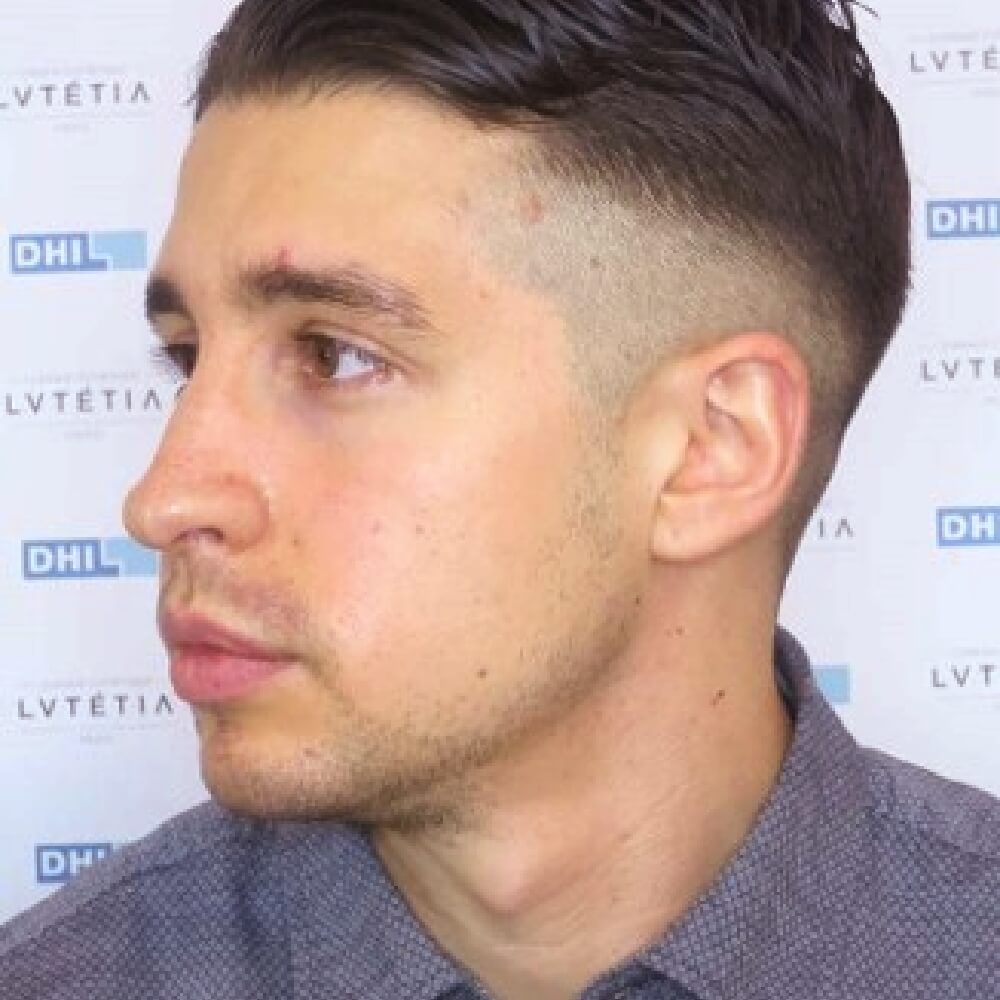 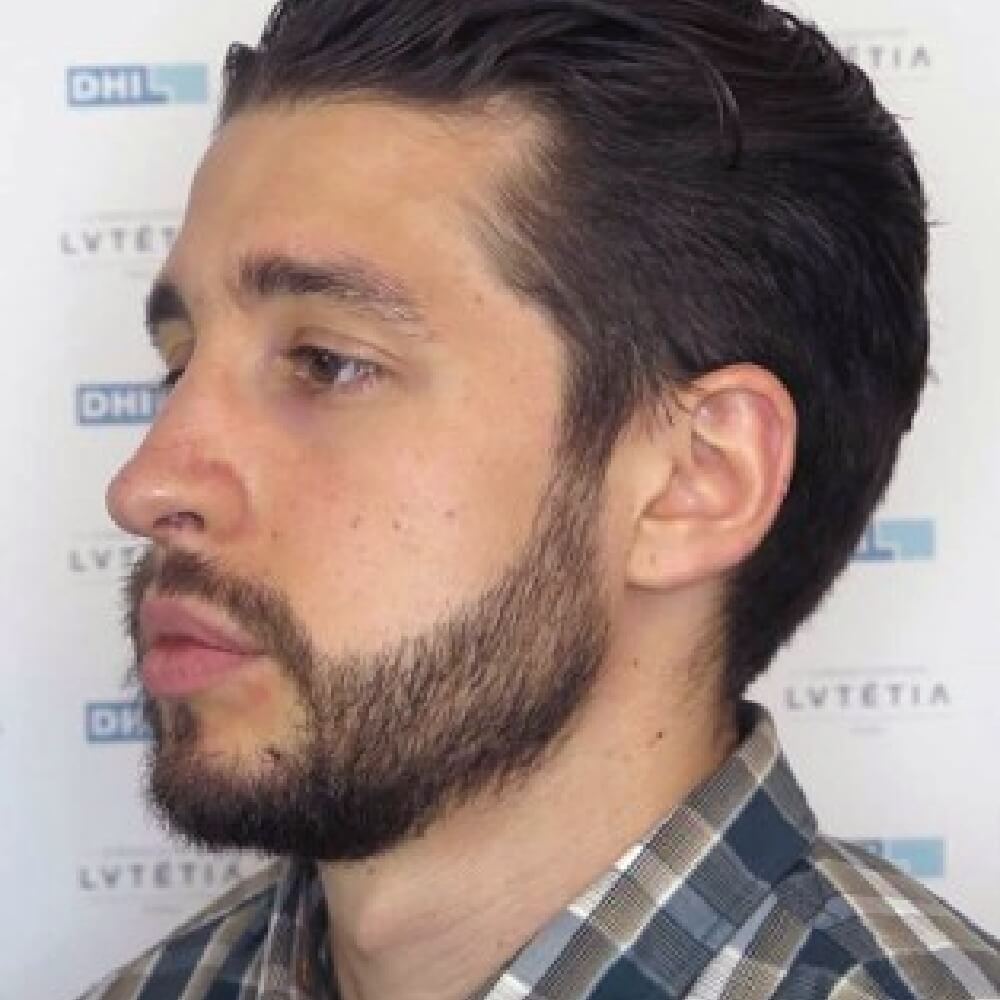 For a lasting thicker beard

With “DHI Direct Hair” transplantation, hair can be transplanted to any desired part of the body or face -and beard procedures are a very popular especially among young men.

Just as with scalp hair transplantation, hair is taken from the donor area at the back of the head and the  back parts of the temples. These are selected in such a way that they match the existing beard hair. With the help of the DHI Implanter, the doctor has full control over the depth, angle and direction of the hair to be implanted during the procedure. As a result, a beautiful and absolutely natural-looking thickening of the facial hair can be achieved, which you can see on our hair transplant before after photos

Book a free and non-binding initial consultation, we will talk to you about your wishes and give you a well-founded and realistic assessment of the possibilities and advantages of our DHI method. Just get in contact with. us!

The advantages of DHI Vienna at a glance

The combination of an innovative, gentle method, an international company with over 75 partner clinics and a renowned medical clinic near the center of Vienna make DHI Vienna a very good choice for local as well as international patients

All procedures are carried out in Austria under strict quality standards and only by specially trained doctors, for maximum safety and quality.

For follicle removal and implantation, we use the smallest possible instruments (diameter <1mm) and no scalpels, bascially eliminating pain.

DHI is active  in 75 clinics worldwide and can look back on 50 years of experience. Our clinic in Vienna is the exclusive DHI partner in Austria.

Only healthy hair follicles with good growth potential are selected and implanted. Our method works without cuts and holes, so a very fast regeneration is achieved.

Patients can go back to normal life within a few days, due to the minimal invasive methode and the resulting fast healing after the transplant.

The procedure is carried out completely without cuts and holes and thus enables a scar-free result. 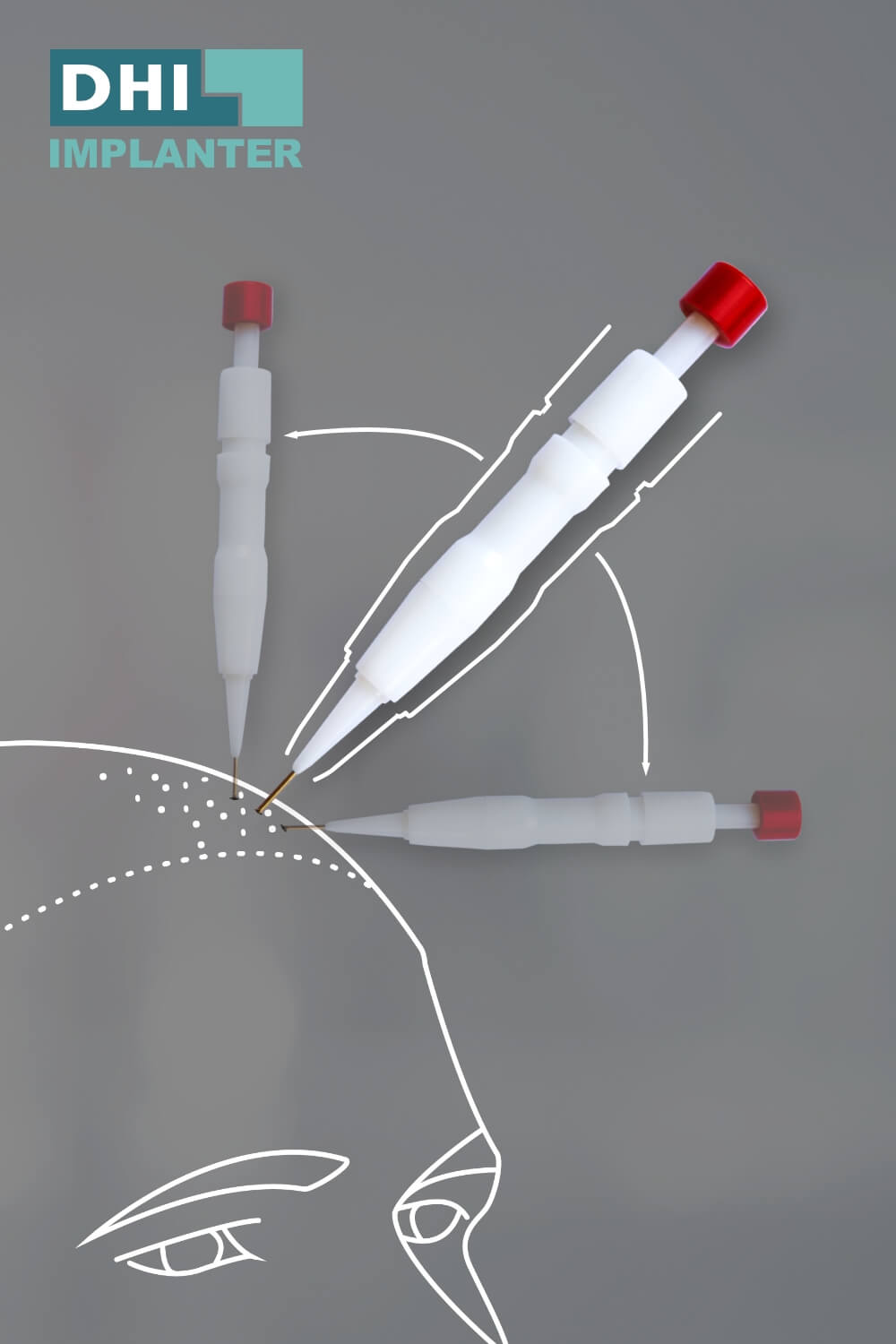 The DHI implanter is a  10 cm long pen specially developed by DHI, which leads to better results than any other instrument when implanting  hair, i.e. especially  compared to a scalpel or a scalpel-like instrument.

The hair follicles are pushed into the tip of the pen and handed over to the doctor. They place the pen on the area to be transplanted, presses the pen tip into the skin, and implants the hair root. The pen tip comes out immediately. In quick succession, this process – supported by an assistant – is repeated thousands of times in a row.

Advantages of the DHI Implanter

the Steps of a  DHI Hair transplantation

The DHI method has been developed over 15 years ago and  tconstantly developed further as the world’s most innovative state-of-the-art self-hair hair transplantation method. With it, we achieve the greatest possible density, a 100% natural result with maximum protection of the follicles and scalp – in  a way  not possible with any other method (see also method comparison here).

After you confirm the hair transplant , we will prepare you for the upcoming ooperation in a conscientious and timely fashion.  You will also be instructed on all medical aspectis by a member of our medical team. Above all, we will inform you in detail about what you need to pay attention to before, during and after the procedure. We can have all conversations with you personally on site at the Centrum Aestheticum, or by phone.

Step 2: Extraction of the hair

This is carried out  under local anesthesia. With the help of an electric micro puncher, the doctor removes the hair follicles individually from the donor zone, i.e. from the back of the head or from the posterior temples. Hair from these areas is not genetically affected by hair loss, even after it is transplanted into the recipient area. Unlike the traditional FUT method, the removal takes place without any cutting.

During the period between extraction and insertion of the hair, our medical team will count, sort and then store the follicles  in a special liquid at a fixed temperature, which promotes its growth after insertion. With the DHI method, the follicles are never separated nor cut during this time – i.e. they are inserted in the same shape as they were extracted, which is unique, leading also to the high growth rate of follicles (>93%)

The insertion of the hair in the recipient area is then carried out with the specially developed “DHI implanter”. This is a pen of about 10 cm long with a  very narrow tip (<1.0 mm) in which the hair follicle is fixed and then pressed into the scalp by the doctor, which  implants the hair root. This minimally invasive process is also carried out under a light local anesthesia. The implanter has significant advantages versus other commonly used instruments. (see here). This can also bee seen with the  Haartranplantation Vorher Nachher pictures.

Immediately after the procedure, the attending physician will sit down with the patient on site and explain in detail the rules of conduct for the days and weeks after the operation. Aftr that our medical team  can be reached at any time via mobile phone number for questions or assistance. If necessary, a personal check-up appointment can also be arranged.

In the weeks and months that follow, we are interested that you stay in touch with us, e.g. by sending up-to-date photos or making a personal appointment. Patients recognize initial improvements after already a few weeks, the final result usually comes after 9-12 months.

In addition, we also advise you on possible supplementary therapy options (e.g.Eigenbluttherapie)

If you are considering a hair transplant, then you will come across different methods during your research that basically have a similar offer – namely the transplantation of follicles resistant to hair loss from the area of the back of the head (donor area) to the thinning or bare part of the body that is to be covered with hair (“receiving area”)

Nevertheless, there are considerable differences between different techniques – especially FUT, FUE and DHI – which we would like to describe to you in detail in this comparison of methods: